Tiepolo - The Banquet of Cleopatra

In the 18th century Italian painting experienced a period of stagnation. The only exception was Venetian school, to which Giovani Battista Tiepolo (1696 - 1770) belonged and is now considered one of the traditional Old Masters of that period. One of the greatest masters of the eighteenth century started his successful career in his native city, Venice, but later worked in Germany and also in Spain, where he died while working on grand project at the Madrid's royal palace.

Since the end of the sixteenth century, the era of Titian, Veronese and Tintoretto, Venice has lost its artistic weight, but the talent and proficiency of Tiepolo brought Venice back to the center of artistic life. By the time he was twenty he was already very well respected artist of his genre, painting large, decorative pictures for churches and palaces.

The Venetian school was distinctive in its innovative approach, which we find especially in the works of Sebastian Ricci and Giovanni Battista Piazzetta. Tiepolo was influenced by the work of these two contemporary artists, but also more importantly by Tintoretto and Veronese. Fresh Rococo style, sympathy to the classical arrangement, and soft colors makes him rightful successor of his Venetian predecessors.

He was preceded in concept of spacial painting by a generation younger Sebastiano Ricci, who formed with his nephew Marco similar pair as Canaletto and Bellotto.

To the people who influenced his work, we must include also vedutisti. Mainly for one simple reason, which is a perspective. Vedutisti were masters of geometry and perspective. It was not camera obscura, but geometrical method, which enabled them to achieve such an artistic result. Vedutisti, with Canaletto in the lead, contributed greatly to the artistic glory of Venice.

Canaletto may have been seen with the camera obscura apparatus, but his method was strictly geometrical. In my opinion Canaletto had used used the camera obscura only to quickly trace the buildings' facade. Next to already mentioned Canaletto and his nephew Bellotto, there were also Francesco Guardi and his brother Giovanni Antonio Guardi, painters whose sister, Maria Cecilia Guardi married Tiepolo in 1719.

Yet Tiepolo's brother in law, painter of vedute Francesco Guardi, for whom the correct perspective was essential, was 16 years younger and it seems obvious who influenced whom in terms of perspective.

All these above mentioned artists, with the exception Tizian and Piazzetta (at least their paintings do not indicate this) knew the Renaissance Perspective system and Tiepolo had lots of inspiration to draw from.

The Banquet of Cleopatra will help to illustrate Tiepolo's geometrical skills. 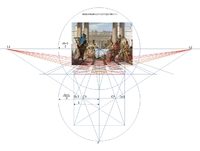 In the picture we can see Cleopatra in the act of throwing the pearl into the glass of vinegar. According to legend and regardless if it dissolved or if she swallowed whole pearl, she won the wager with The Roman consul Mark Antony who can stage the most expensive feast.

Precise and open perspective leads our gaze through the symmetrical composition of classical architecture. Cleopatra and Mark Anthony are reclining from each other and their trunks create a V shape. Their body language suggests that are in dispute at the moment as they argue who will win the bet. However, their dramatic poses suggest more than seen.

The extended lines coming through their bodies meet at the bottom the golden ratio circle. This is one the most important point in the construction from which our sight is harmoniously directed. And even they seem to be in disagreement at the visible, conscious level, they are connected with everlasting bond on the subconscious level. And the historical story that follows only confirms strong bonds of their union.

In addition to its natural elegance, Tiepolo displays supreme control of illusory space in his painting. The picture is contrived according to strict spatial logic. Tiles seem to be too narrow to be squares, justifiably, because they are schemed in 2(length) to 1(width) ratio. Fig.2

Tiepolo utilized far distance point and narrow viewing angle, an angle which could be compared to a focal distance of a long lens.

Prolonged figures are bathed in luminous tone with special attention to single out enigmatic figure on the left, strangely framed with two other figures on each side. At the first glance it seems like it is this blue caped pilgrim who is bringing the plate, but when we look closely his hand is behind his back with only a little finger sticking out. Is he giving us a secret hand sing or is he just pulling on his robe. Or is just pointing to the same spot where lines coming through the bodies of Cleopatra and Mark meet?

Besides natural elegance, Tiepolo developed in his narrative paintings unmatched virtuosity in an illusory display of three-dimensional space and we can fairly say that he was one of the last masters who represented the perspectival tradition in the country which had given it birth.