Vermeer and the Art of the Renaissance Perpective - Part 2. 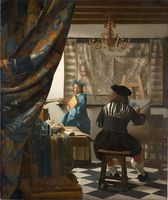 The Art of Painting

Each of the Vermeer's rooms is decorated with a different tile design. The floor of the room above is covered with black crossing tile patern.  The Allegory of Faith black cross is reversed to white cross. The Music Lesson have simple black and white crossing and The Love Letter  goes back to black cross design.

Vermeer has adapted the tile pattern according to his imagination. He might have been inspired by Van Bassen, or any other painter of architectural fantasy. Small, simple tiles, which we can see in his early paintings The Girl with a Wine Glass or The Wine Glass were probably the onescovering his floor at home. He later redesigned his floor with the larger ones (1 voet), which were more suitable to highlight a spatial grid and to accentuate his perspective conception.

The Art of Painting is one of the artist's most challenging perspectives. The analysis will explain how Vermeer again used the golden ratio in his proportional scheme.

The geometric construction involves creating a floor plan or an overhead view by which objects are accurately positioned and later brought into precise foreshortening.

In contrast with The Music Lesson hereVermeer took the picture from a greater distance and used a narrower viewing angle. The apex of visual pyramid, point F, which is closely related to the viewer's position had been altered too. It can be compared to changing the lens with a longer focal length.

The front edge of the table is aligned with the picture plane (red line) and the table alone measures 4.5 by 3 tiles. Also notice a perfect alignment of the chairs. The distance between them again adapts the Sacred Geometry proportion.

The distance point or the position of the viewer plays the most crucial role in the perspectival painting. If this point is correctly placed the entire space construction unfolds in visual harmony. In The Art of Painting the position of the viewer from whose eye the picture is taken is distant to the side of base square in the ratio of √5+1/2 to 1 or φ to 1. In this case 4.75 tiles * 1.618 = 7.7. This leads us to 14th tile from the back wall.

Given our knowledge of the setting, we can reasonably detect the clues Vermeer left behind. Vermeer's (painter's) mahlstick aims exactly to the point A where line from right lower corner crosses the border of the lower square and farther determines the lateral point on the horizon. In addition left leg of painter's easel points to the F point, right leg point to the corner of the picture, and back leg points to the corner of the base square (green dashed lines). The F point is again determined geometrically as the root of 5/2.

The edges of the table are aligned with the important points of the geometrical scheme. The right edge aims to the corner of the base square. Left edge aims to the left crossing of the φ circumference and the base line (green continuous lines). Left front corner of the table touches the boundary of the viewing angle and consequently the boundary of the picture.

As already mentioned table top measures 4.5 by 3 tiles (diagonaly), which equals 180 x 120cm. We can also determine the height of the table, again applying The Rule of Three, by comparing the vertical and horizontal dimensions. The calculation comes out at 65cm. The height of the table unsurprisingly equals 1 tile * φ. Figure of Clio, most likely modeled after his teenage daughter, measures only around is 150cm. The ceiling is high 7 tiles or 280 cm (up to the beams).

He had been to Italy twice and must have brought some information and clues from Leon Battista Alberti or Pierro dela Francesca. Here, in the portrait of his mental state, Durer expresses the frustration over inability to decipher the secret geometric system. Behind the winged person is the so-called Magic Square, where rows, columns, diagonals and other combinations add up to the number 34. Was the number 34 a clue he had brought from Italy and later transformed into an enigmatic square? Although Durer was very close to solving the riddle of the Renaissance perspective, he did not complete the missing pieces to the whole puzzle.

FIG. 15/ The Art of Painting - Side view analysis

The magic of The Art of Painting is hidden behind the sacred proportions of the Golden Ratio and constructional method of the Renaissance perspective system. It is important to understand that the plan and elevation procedure allows the painter to create imaginary perspectives from scratch, but also to create perspectives of existing buildings from actual measurements, seen from any height or distance. Utilizing the method we can reverse-calculate the dimensions of the objects in the picture.

If Vermeer had used a camera obscura, he would have to move the entire wall further back almost another 2 tiles (80cm) to be able project a 120cm large image on the wall. 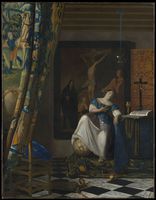 Many art historians have considered painting to be one of Vermeer's less successful works. The work was probably a commissioned and he was given specific assignment to paint an parable of the Catholic faith. Although beautifully painted, with a intriguing iconography, we must admit that the painting is less convincing.  The whole scene looks somehow contrived, unlike intimate moments of reality in his other works.

The image has already been assessed and analyzed from a psychological point of view by many. But let us see how Vermeer used a symbolical narrative to deliver a specific message about hiden geometry. An apple, Old testament's  symbol of knowledge, seemingly without purpose laid on the ground. But why on the ground right there?

FIG. 14/ The Allegory of Faith - Analysis

Vermeer had used same focal length as in The Art of Painting. If we connect the point F with the crucifix, the imaginary line cuts the apple in half. Another line from the cup aims to the viewing point. These two lines (green dashed) meet in the middle of the apple. Vermeer suggests that knowledge lies at both the focal point and the viewing point. Both points are an integral part of the perspective system.

We find another hint when we follow the look of the man on the curtain through the vanishing point. The line of sight aims to the point where the line passes from the corner of the bottom square and farther determines the distance point on the horizon.

If Vermeer had used a camera obscura here, he would have to move the entire wall further back almost another 3.5 tiles (140cm) to be able project a 114cm large image on the wall. 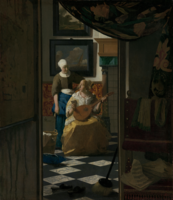 Although Vermeer's perspectives seem to be more accurate than those of the overwhelming number of interior painters of the time, he used the same perspective system as De Hooch or most accomplished architectural painters. He was simply more scrupulous in its application and the arrangement of the visual elements in a painting. Each of his composition was thoroughly prepared in advance, so there was little need to change anything during the process of painting. The lines, colors, repeated shapes create a pattern of his composition, which leads our eye under the rhythm the same way music does.

And that's figuratively what Vermeer is trying to suggest as he aims the lute to the point where the Phi circle crosses the bottom line. It is the distance that determines the ratio of the focal point.

Vermeer, due to the dark hallway, moved the viewing point further down than in all his previous works and also narrowed the viewing angle.

Notice how Vermeer incorporated the love letter into the overall composition. Although our protagonists do not look at the letter itself, the lines drawn from their eyes to the important points of the schema intersect the middle of the letter, in the seal. One line aims to the F point, and the other to the corner of the square. In addition, if we lead the line from the vanishing point through the letter seal, it will be projected at the point where the viewer is standing (green lines).

There is only one imperfection, the chair in the foreground. Even a meticulous painter like Vermeer didn't bother with the perspective of a chair and he just covered it with a stacks of papers. But even under the papers we can estimate that the seating area is foreshortened too much.

Could it be that he did not know yet how to draw perspective of an elevated object, and in order to avoid it, he just placed the stacks of papers to cover the surface of the seat?

The viewing point in Love Letter lies almost on the 19th tile and the image size would be projected on the level of 21st tile. I don't think there's any need to mention the impossibility of using a camera obscura here.

We can spend a few hours in front of Vermeer's picture and yet do not encompass all his wealthiness. Although personal criteria for beauty can be quite different, there are solutions that will become immediately apparent to their harmonious appearance. When the mathematics fits, then a theory becomes a method. The result can have a permanent effect and the generally perceived beauty stays with us forever. In the end, it is all about the correct proportions.

The best Renaissance and Baroque minds have contributed to the method of spatial construction and thanks to their geometrical knowledge, which springs only from faithful and patient devotion, the paintings of superior and enduring authenticity have been created. The knowledge of the Renaissance Perspective was recognizable as an intellectual and visual tool for several centuries and stands at the beginning of the artistic era unparalleled in the world.

Mystery surrounding Vermeer's beautiful and delicate paintings continues to appeal not only to experts, but also to the general public. All attempts to imitate his rendition of space have been so far unconvincing, because those who tried held onto the erroneous theory of the camera obscura/lucida. We should not be fooled by pop artists' (D. Hockney) theories, the public deserves to know how the old masters proceeded in creating their masterpieces.

By pulling the curtain bit to the side, I would like to hope, Vermeer's paintings will become even more attractive than before, because as great E. H. Gombrich said "One never finishes learning about art. There are always new things to discover".